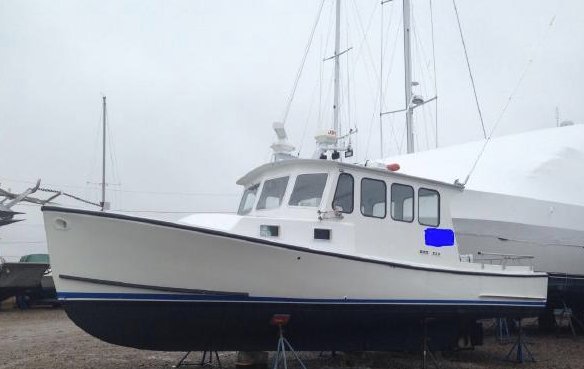 This good-looking 1974 Bruno Stillman 35 (she's been on the forum before) is still listed with Athearn: http://www.athearnmarine.com/list_detail.a5w?fileno=TN4305

Have searched on the forum and elsewhere, but still curious about the Bruno Stillman story. I know there are many owners and fans here. Did Robert Lowell design the 35 and other Brunos? Who was or were Bruno and Stillman? Again, curious.

They are beautiful hulls -- as well as the house above, for example -- and some 35s with yacht-like finish (although low powered in the 250 hp range) are available today at or under $60k approx.

Grateful for any thoughts and opinions.

I don't know much about brunos other than what I have learned looking at a few 42's. Some hulls are cored, some solid, cored brunos have a reputation for being wet. In the later years apparently the quality went downhill and some (one?) boats were lost when a hull cracked or split at sea. The mold for the 42 was passed to cape dory, they continued laying up 42 hulls, I hear the Cape dories are well built hulls. Overall, old style, slow hulls that are comfortable, but inefficient at higher speeds.

I think Aotea is asking about the company more than the boats they built.

The following is excerpted from a webpage describing the infamous lawsuit.

“Plaintiff, Bruno & Stillman, Inc. (hereinafter "the company"), is a Delaware corporation engaged in the manufacture and sale of commercial fishing boats with a principal place of business in New Hampshire. The defendant is the Globe Newspaper Company, publisher of the Boston Globe (hereinafter "the Globe "), with a principal place of business in Massachusetts. According to the facts alleged in the complaint, the company began building 35 to 55 foot fiberglass workboats in 1971, selling eight in that year. By dint of "enormous work and effort ... in manufacturing, promoting and selling boats", sales increased steadily, so that in 1977 the company sold nearly forty 35-foot boats, forty 42-footers, and ten 55-footers, and some newly introduced 35-foot pleasure boats. Between 1971 and the end of 1977 the company had sold over 400 boats "throughout the world" and had become the largest builder of fishing boats in New England. It enjoyed an "excellent reputation as a quality boat builder in the tough and competitive commercial fishing industry".”

The “35-foot pleasure boats ”mentioned above were the Sport Cruisers, a different model from the original 35-foot commercial version.

I believe B&S closed their doors in the very late 70’s and the molds were sold off to various other builders.
D

I was told that my 35' Flybridge was one of the last of the line. USCG documentation say 1981, the serial number indicates 1980. Has the 260 HP Cat vs the NA version.
Regardless of age, model and power, it seems pretty difficult finding one in good shape for under $75K

I love my Bruno 35 commercial model.
Royal Lowell (not Robert) designed the Bruno's 35,42,55 as well as dozens of other highly regarded downeast models many produced in fiberglass to this day.
Dick Bruno was the moving force at the plant in Newington NH. Yes, they did some sloppy work in later years but most of their problems were as a result of innovating in cored hulls (which buyers did not how to deal with re: protecting the core) and selling unfinished hulls directly to watermen resulting in the same types of core problems.
If the vessel in question is not a cored one, then go for it. If it is cored, carefully sound every square inch of it for wet or delaminated spots, mark them out, and set your price accordingly.
The Bruno 42 is one of the finest sea boats ever designed and can be seen in every port in the NE, Designed b/4 brute force and load carrying were the main design points. It's little sister the 35 has many of the 42's good points.
There are Bruno's on Bermuda that came on their own bottoms. Until a few years ago, Dick traveled each year to So. America in his own 42' to teach boatbuilding. He may be gone now but he left his mark in every harbor in the NE.
Royal Lowell's book is easily found and a good read concerning boat building.
Last edited: Jan 16, 2019

That boat belongs to a forum member. There is a complete build thread for it floating around here somewhere. Quite a bit of work went into it.

I hope I didn't sound too negative in my earlier post. Still would buy a 42 if/when the right boat presented itself.

My understanding is that Nauset Marine in Orleans, MA bought the Bruno 35 molds and produced them for a number of years on a semi-custom basis. Our 1984 Nauset is a solid glass hull and maintains the exceptional Royal Lowell lines. I think it's a pretty neat boat. Amazing what could be accomplished by a talented designer prior to the advent of computer aided design and reliable computer models.

Wonderful info, folks. Thank you. Very helpful. Yes, 'Royal' Lowell. I have his book -- it's a remarkable work and great learning.

Keelboater said:
That boat belongs to a forum member. There is a complete build thread for it floating around here somewhere. Quite a bit of work went into it.
Click to expand...

I agree. Our fellow forum member did a fabulous rebuild on this boat -- notably, a serious redesign of the house, making it look like a boat Royal Lowell would be proud of. And many other upgrades and additions.
Last edited: Jan 17, 2019

Interestingly, Maine boatbuilder and restorer John Flanzer built what is probably the last wood-built version (so far) of Royal Lowell's last wooden boat design, the elegant 30-foot lobster boat featured in his book, Boatbuilding Down East. John acquired a full set of plans from the family and built her from scratch. John also once owned and restored the beautiful Sadie, a wooden cruiser, now at Marion, Massachusetts, currently available. John has retired from boat building. Here's a link to his amazing Royal project (with a ton of great pictures of the build): Royal Lowell lobster boat wooden for sale

Here's Royal nearing the end of construction. She is just awesomely beautiful. I think you can also see that elegant sheer in the Bruno Stillman boats, especially the 35: 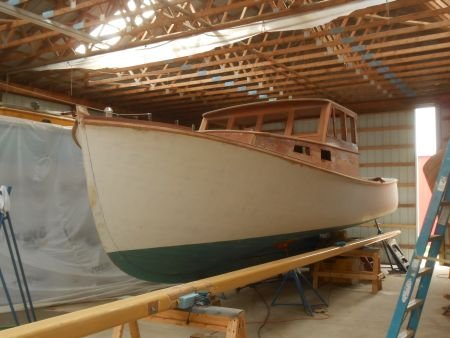 Thanks for posting that link. It's great to see a true classic brought to life.
T 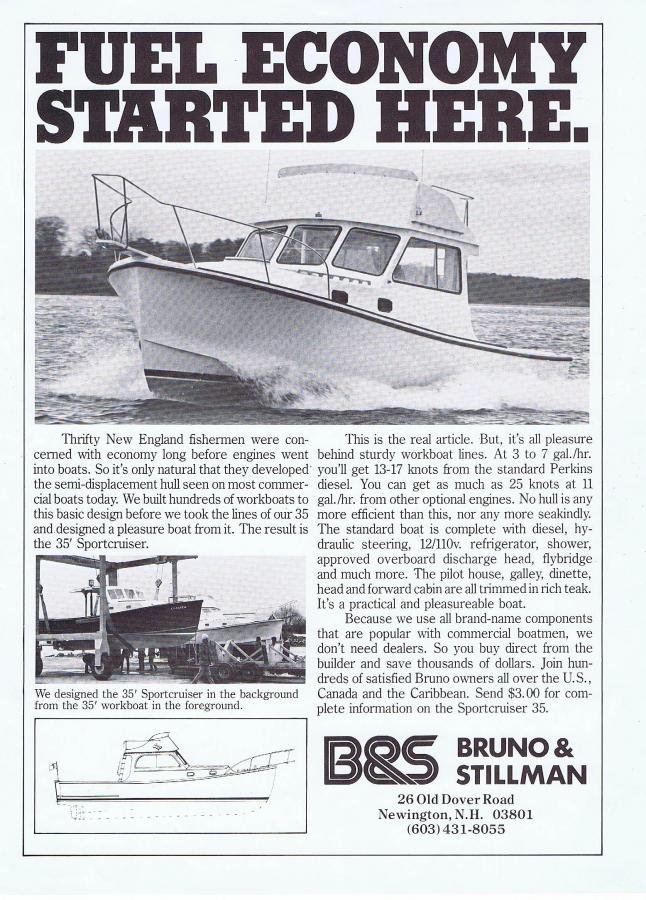 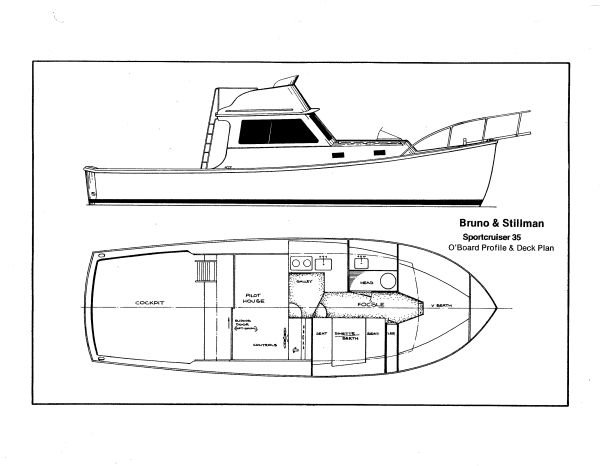 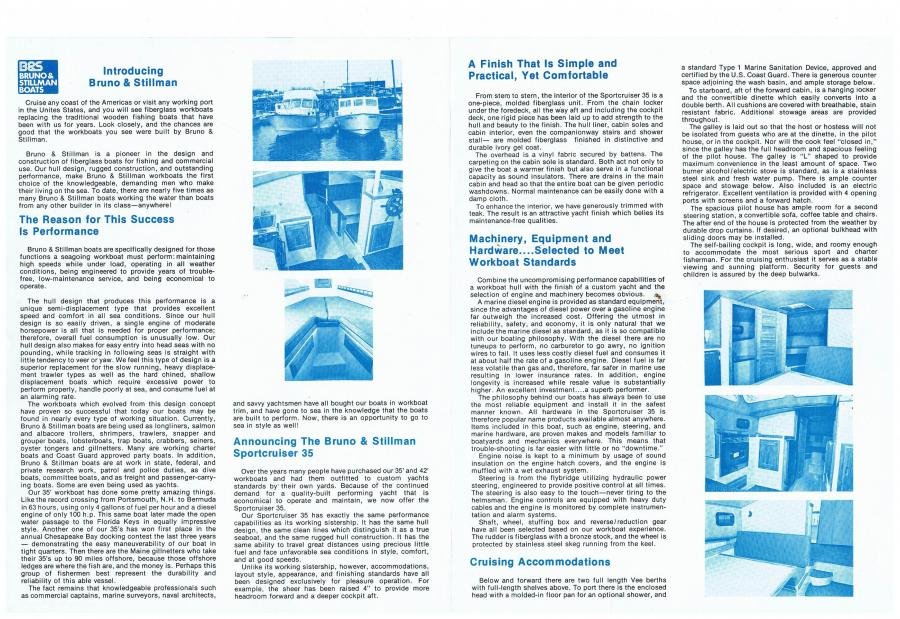 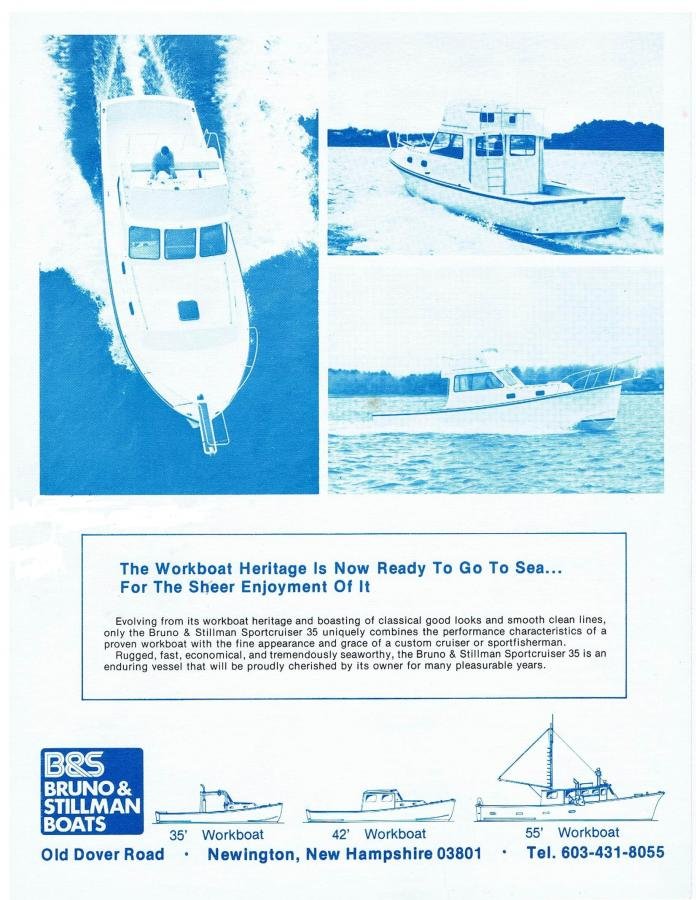 Aotea thanks for info look like nice work
F

Thanks Keelboater. Great read for a crummy winter afternoon.

Took this pic in a local tackle shop. 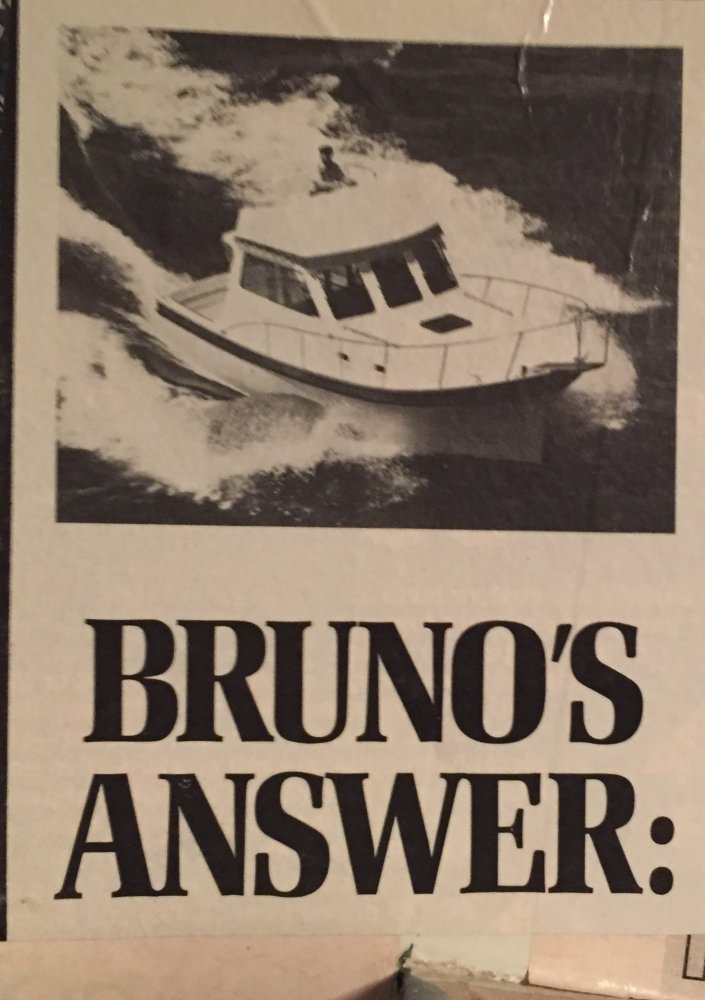