Looking for info/opinions on Finest Kind '17s. I believe they were built only in the early to mid 70s. I have found only one discussion online. Considering buying as a first boat and will potentially restore as needed. Looking for specs, how they were built, hull weight, handling characteristics, etc. Has anyone owned one? How much wood is likely to have been used in the hull? How much (ballpark) are they likely to be worth unrestored and restored?

These were first built in Middleboro then Plymouth Ma. Roger Crawford of Crawford Boatbuilding In Marshfield built some of the early 17's. I am guessing in the early 70's. He might shed some light on the lay up and construction. If you have access to the old National Fisherman Magazines, The finest kinds were advertised on a regular basis. This was back when National Fisherman was a real magazine.

I'm sure you have most likely read this

The Finest Kind that I am referring to was not lapstake. There is early Finest Kind locally. If I get a chance, I will stop and get a picture.
B

South Shore Boatworks -
My father has a Swamscott Dory made by Roger Crawford. I will give Roger a call. I am looking online for archived National Fisherman but no luck so far. I might be able to find it at a library. Thanks

Tunamojo -
I did see that thanks. That is the only ref I have found so far.

blackfly -
The Stagepoints are beautiful and look very well made. From what I am reading they are dry, stable, and perform well. If I don't get this boat I will include Stagepoints in my search. I suspect they are hard to find.

Ran into a guy with one this weekend past and asked him if it was a finestkind, he said it was. I think it was really Stagepoint 17 since it was a 1990 he said.

There was one in Ipswich that had a t-top (no thanks on a de/novi!) for $4k a month or two back and that was unrestored. There was one in Maine someone bought for $1500 on Craigslist with a 40 two years back also unrestored that was bought and then flipped for probably 2.5 times that.

They are rare - so when they do come up its gonna have to be what the seller wants for it minus a couple bucks, as always cash is king.
R

Back in the 70's Wetmores Marina in Westbrook Ct. sold these boats. They were a great looking boat.
E

I own a Finestkind 17 built in 1983, probably built by Chris Roth in Salem MA during his "in between" years. The Finestkind was designed by Jon Blanchard of Duxbury and Pembroke MA in the very early 70's. I think the first few were built by Roger Crawford, a great builder in Marshfield MA, and then became Yankee Fiberglass in Middelboro MA, formed by Blanchard and investors. The company went under in the later 70's and the molds were sold to Chris Roth of Rothbilt, who produced them sporadically until selling the molds to Stagepoint. It is an exceedingly well built boat using solid fiberglass with encapsulated wood stringers and transom. Finestkind is a thing of beauty in design and construction. I restore antique boats as a hobby and this is my first fiberglass project boat. I still can't believe how well it has held up after 31 years of use. It needs nothing but light cosmetics.
In short, it's a great sea kindly boat of enormous charm. If I were dumb enough to go into the boatbuilding business, I'd build these boats with very few refinements. If you can find one, grab it. Today's price range is 5-10K. Honestly, at 10K for a well sorted boat it is still a bargain.

I've seen two over the years, one in person. The first was in Falmouth in the mid 90s when we lived on the Cape, a tiller steer and very basic. I'd stop at the marina now and then and just to check it out, nice looking boat. Recently on Craigslist or boat trader I saw one for sale, think it was somewhere on the South Shore. That one in Falmouth really made an impression on me and led me to buy a downeast boat in 2004.
J

i have never seen a tiller model but often thought that was the only way to go with this skiff.
N

Don't know if it's an outdated website...but it still works.
If you google "sound boatworks llc" they are a dealer for stagepoint boats.
I remember looking at them and wanting one when seaway were making them.
L

I just scooped up a 1975 Finestkind 17'! It was love at first sight. It's classic style and build turns heads and on the water or while she's on the trailer. I purchased the boat with a 2000 70 Johnson in great shape and a trailer that needs some work but functions just fine. All in was $4000 which was really all I could afford but feel it's value is much higher than purchase price. A little bottom paint and some varnish on wood and she was good to go.

Las Tango, was that the one on Craigslist in. MA? That boat looked pretty clean in the pic
L

It was not the one posted on Craigslist. I did see picture of that one and it looked fantastic. I purchased the boat on Cape Cod. It does not look as good as the one posted on CL but I'm planning to do a full restoration which should not take too much.

I'm excited to have just stumbled across this discussion! I wish there was a user group for these fine boats. I found mine on Craigslist in 2009 and purchased hull #63 from the original owner. The boat came with all his original paperwork including the attached brochure. At some point prior to this hull they added a modified step to hull. There are a few of these plying the waters of the North and South Rivers in MA, although I think the others are Rothbilt. I'm lucky enough to have had Roger Crawford near me and had him do some wood repairs this past spring. 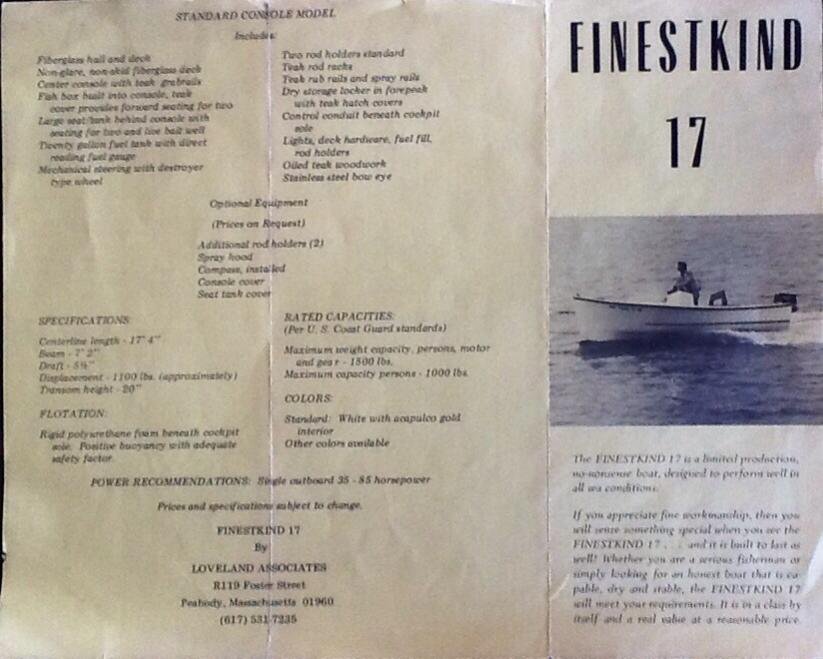 Here's the back of the brochure. 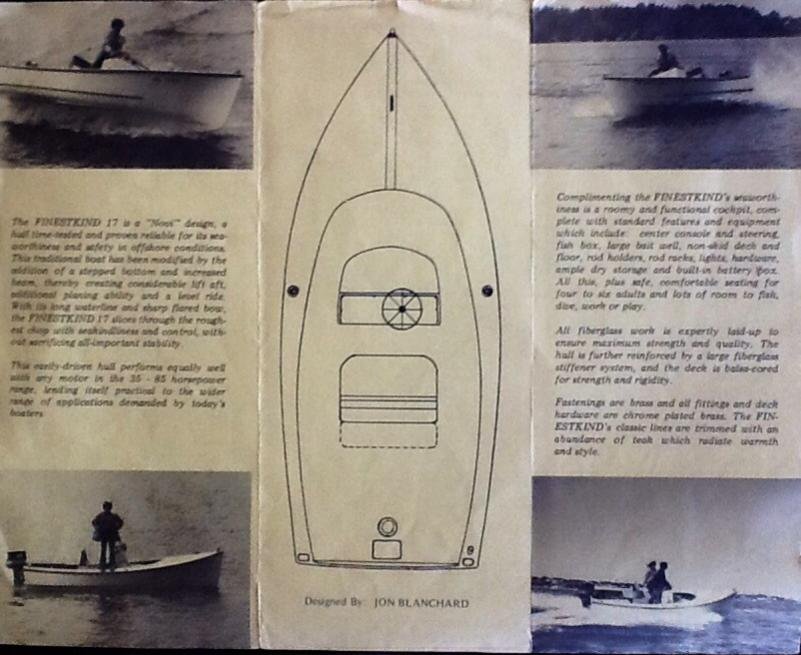