No stripers ? where do you live ? When i was a youngun Sow & Pig, Canapitsit ,Devils bridge and all the places out there at night were Awesom.

Old Mud said:
No stripers ? where do you live ? When i was a youngun Sow & Pig, Canapitsit ,Devils bridge and all the places out there at night were Awesom.
Click to expand...

Ahhh, it’s was different in the 80’s and most of the 90’s on Long Island. Then again after hurricane ages in ‘71 and the clamming collapse in 82/83 here the whole dynamic of the bays, inlets and oceans changed, especially the fisheries. The difference between Mass/Maine was the management. New York in the mid 70’s into the 80’s had a population explosion. Sewage, roads, infrastructure, lawns! The management and keeping certain ways safe, clean, and long term lax’d off. It Is a shame. But, to stray anymore into the past floats into the realm of politics in this particular situation, which is slick enough to put a bacon factory to shame.
Last edited: Apr 11, 2020

Old Mud said:
Jess, just think of the changes i have seen since 1952 , Scary to be sure.
Click to expand...

Shit this is going to be my 51st year fishing you sure got me beat Don !!

steveinak said:
Shit this is going to be my 51st year fishing you sure got me beat Don !!
Click to expand...

Well it has been a few jobs in between. You know the love hate (or thought you hate) relationship. I havnt been fishing All my life but on June 23 1952 i was headed for Georges and that was the beginning.

I bet George’s was on fire back then. Probably loaded up with nice cod, amongst other things

Fishnjess said:
I bet George’s was on fire back then. Probably loaded up with nice cod, amongst other things
Click to expand...

But a lot less technology so...

Yes there were many fish, Big fish. Also little technology except the Otter trawl that Mullen developed. Before the EEZ when everybody in the world fished there even then at that point we would have never depleted a species. At least with our boats. Most other country's had much bigger boats because they would come from afar. We could go out there with some smaller very worn boats because we were only 150 or so miles away. Things like a sounder that didn't work and a radio that did work out to the end of the river. Oh but our fog horn was operational.

Sorry for the derail on the lobsters.

Buy local and fresh off the boats. 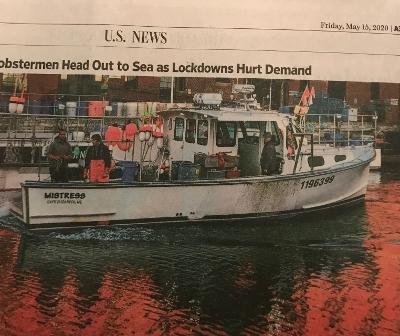 We sell off the boat in mass southcoast direct source seafood

Virus Makes Lobsters So Cheap That Sellers Face a Fatal Blow
More
(Bloomberg) -- The coronavirus outbreak is turning one luxury treat reserved for special occasions into a meal bargain hunters can afford.
U.S. lobster prices have plummeted to the lowest in at least four years after the spread of the virus halted charter flights to Asia at a time when sales usually boom for Chinese New Year celebrations.
The fallout has left thousands of pounds of unsold lobster flooding North American markets and squeezing U.S. businesses that were already hurting from lost sales due to China’s tariffs from its trade war with Washington.
“This is like a fatal blow,” said Stephanie Nadeau, owner of Arundel, Maine-based The Lobster Co., which saw orders to Hong Kong shrivel from about 1,000 boxes a week to a total of 120 boxes -- each carrying 33 pounds -- since late January. “I’m about to lay off most of my employees.”
The U.S. used to be the main supplier of live lobster to China as exporters tapped into surging demand from the Asian nation’s growing middle class. Buyers turned to relatively cheaper supply from Canada after Beijing placed retaliatory tariffs on American crustaceans in 2018.
Lobster Flights
Canada typically sent about nine charter flights a week, with a total of 1.5 million pounds of the shellfish, from Nova Scotia to South Korea and mainland China for everything from restaurants and markets to business meetings and weddings.
But as restrictions were placed on the borders of Asian nations including China to contain the spread of the virus, Canadian product began flooding the U.S. market. That pushed prices lower, said Liz Cuozzo, seafood market reporter at research company Urner Barry, which has been tracking food prices since 1858.
Prices for New England halves -- a whole lobster weighing 1.5 pounds -- have tumbled 17% since Jan. 20 and are currently at $8.10, the lowest for the period since at least 2016, she said. They typically rise this time of year as supplies are tighter before the main fishing season begins. Last year, they cost $10.70, with the 10-year-average at $9.85.
Demand for live Canadian lobster has dwindled to 5% of normal volumes since the Chinese New Year when restaurants started canceling reservations and people stayed home, said Stewart Lamont, managing director of Tangier Lobster Company in Nova Scotia.
Inventory Swells
Companies are storing inventory, directing products to other markets in Europe, North America and the Middle East, and sending more lobster tails and frozen lobster to be processed, he said.
It’s not just the U.S. and Canada that are affected. Australia counts China as the main destination for its rock lobster exports and its seafood industry will likely see a significant short-term impact, the nation’s agriculture ministry said in a report. New Zealand said it’ll allow a limited release of rock lobster back into the wild after Chinese buyers canceled orders.
There’s a risk that other markets may shut down as the virus spreads, and uncertainty swirls over how many smaller merchants or mom-and-pop restaurants in China may be out of business and not return to buy following the outbreak, said Mark Barlow, owner of Island Seafood in Eliot, Maine.
The Lobster Co.’s Nadeau saw her inventory lose 40% of its value as shore prices dipped from C$10 ($7.45) to C$6, and was forced to sell 50,000 pounds at a loss. She is laying off eight people from her staff of 14. “My customers got creamed and I got creamed,” she said.
--With assistance from Anna Kitanaka.
To contact the reporter on this story: Jen Skerritt in Winnipeg at [email protected]
To contact the editors responsible for this story: James Attwood at [email protected], Pratish Narayanan, Patrick McKiernan
Click to expand...

The same thing is happening to prices for virtually all restaurant-fare fish and shellfish, including especially (maybe) out in Hawaii. Ex-vessel prices for many pelagic species there are less than half what they were in February. That is below break- even, of course, for most operations. Staying tied to the dock is tough, however, since fixed costs are often on a monthly-payment basis. The Marshal’s auctions are going to be a weekly soon event unless things change right away. Fingers crossed for a swift come back and a viable vaccine!

I hear sea scallops were $5/lb last week in New Bedford. Definitely not worth going for that price. Hard to imagine. My daughter picked a tough year to start lobstering!

Any guess on tuna prices for this year? This is the first time in the past few years I have seriously considered going because of the uncertainty with everything else.

Not a peep from the buyers here. No news is good news ? I think not.

Old Mud said:
Not a peep from the buyers here. No news is good news ? I think not.
Click to expand...