scbob said:
There are two distinct style of fishing boats built up in the Canadian Maritimes (Nova Scotia, PEI and New Brunswick). On the South Shore of NS they build displacement hulls as this has evolved for the heavy Atlantic Seas. Builders like Atkinson, Wedgeport, Theriault, etc.These are typically referred to as Cape Islanders or Novi Boats,
Cape Islander - Wikipedia
Then on PEI and New Brunswick they build a different style boat which will get up on the plane. This style has evolved to match the shorter seas, and smaller swells in the Northumberland Strait area. Builders such as Provincial, Hutt Brothers, on PEI, and Samson out of NB. This style of boat is known as Northumberland Stait.
Civilization.ca - Lifelines - Nova Scotia Motor Fishing Boats

I read recently that there are about 1,000 registered commercial lobster boats on PEI and 1,500 in Nova Scotia; plus some more in New Bruswick I'm sure. That's a lot of boats chasing lobster !!

Many Island boats are a hybrid of Northumberland and Gulf sea conditions, although many people classify Provincials as Northumberland Strait boats they are a hybrid. I will post an engineering report from the 1970s which explores developing a hybrid boat to suit both shores of PEI.
M

Viexile said:
Now THAT'S a Novi. My understanding of Novis over the years, with no disparagement intended to anyone, true Novi's were generally, big prow, working machine platform typically built out of wood, often fiberglassed over after awhile. My further understanding was that were stoutly built as working boats with a "10 year life." Don't jump on me about that, but that's what I was told many years ago. I know where there's 2 parked nearby and I wouldn't want to tackle getting them back in the water. The other boats I guess they look like Novi's. I'll take a [picture of Deano's old Novis if I get a chance.
Click to expand...

Funny you say that, "10 year life". I don't know if it is true, but someone told me years ago that with the subsidies the fishermen got it did not make sense for them to keep a boat long term. Better off buying a new one every so many years.

If it was it's not true anymore. The yards up there have evolved to building very modern boats with any level of fit and finish that you desire.
M

Brainey said:
If it was it's not true anymore. The yards up there have evolved to building very modern boats with any level of fit and finish that you desire.
Click to expand...

The days of Novi boats having a reputation of being a 15-year boat – work them hard (and in weather you probably would not want to be out in in a “Maine-hull”), and when they get nail-sick just take the engine out and install it in a new hull and leave to old hull on a mud bank, ended with the introduction of fiberglass.

The commonest style Novi seen in New England for decades was probably the Cape Island Launch, illustrated below by Samuel Manning.

As said on an earlier Novi thread, these boats had the advantage over Maine-style hulls in being comfortable -- spanker sail up -- laying-to at night. Thus, their cruising range and ability to stay out in rough water exceeded that of the “Downeast”-type.

The nomenclature gets confusing, as Nova Scotia was always thought of as being even more culturally, as well as directionally, down-east than Maine.

The photo is of a 42-foot Cape Island Launch that was out of Clarks Harbor, in Southwestern N.S. in 1973, harpoon Sword-fishing on Georges Bank. Normally the crew was out there for at least a few days at a time, either tub-trawling for ground-fish or, in the Summertime, for Swordfish. And the boats could "turn on a dime", facilitating swinging the striker over a fish, which may have a lot to do with the cut-away fore-foot and their shallow-draft at the stern.

When visiting Barbados about 40 years ago I noticed how Novi-like in hull-shape the Barbadian fishing boats hauled up on the beach when not working were. The model must have some kind of connection to the British Commonwealth. 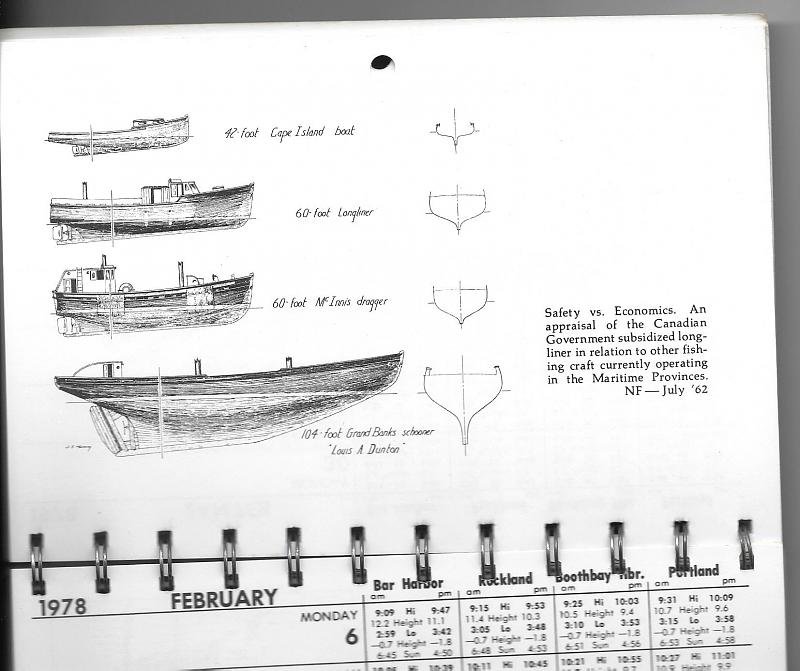 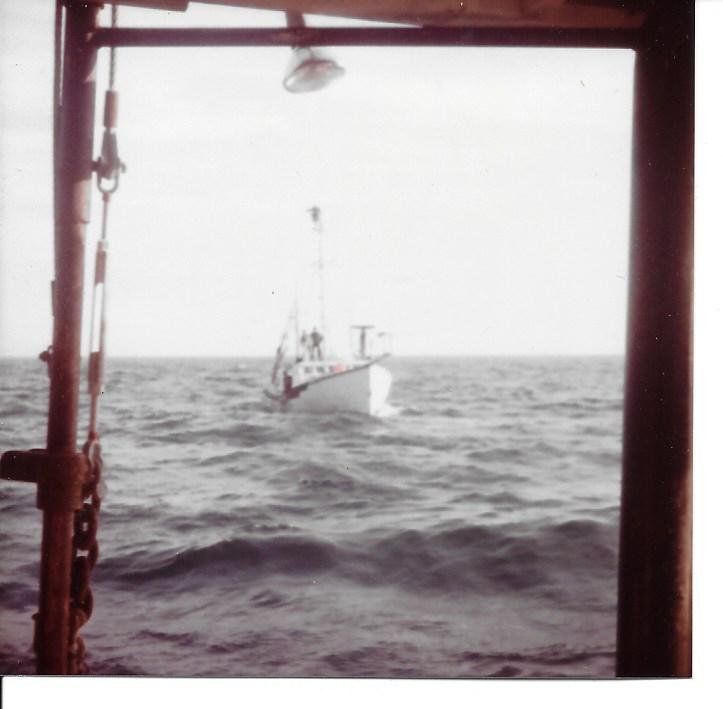